Palestinian artist Kamal Boullata was born in Jerusalem but has been living in exile for 50 years.

He was mesmerized with “the intricate Arabesque patterns adorning the Dome of the Rock” that he observed in his hometown. Geometry, Arabic calligraphy and natural light later became central pillars in his body of work.

Through his exile, he was able to “freely reflect on Palestine’s spiritual and Arab heritage,” he said, “which goes back hundreds of years, before the country’s fall under the colonial rule of Israel.”

Over the years, he has lived in France, Morocco and Washington, DC, and paid close attention to natural light in each of these places.

He concludes that “perhaps it was the light of Jerusalem that I have been seeking to recapture all along.” 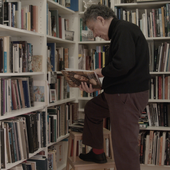 Palestinian artist Kamal Boullata was born in Jerusalem but has been living in exile for 50 years. Boullata's early years in Jerusalem influence his abstract paintings today. He was mesmerized with